Realme has refreshed its GT-smartphone series with the new Realme GT Neo 3. The phone has two editions - a regular model with a 5,000mAh battery and 80W fast charging, and a 150W edition that comes with a 4,500mAh battery and 150W UltraDart charging. Realme says the 150W fast charging technology will provide up to 50 percent juice within five minutes.

Users with the 80W SuperDart charger will fully charge the smartphone in 32-minutes, according to Realme. The company has also received a TUV Rheinland Safe Fast-Charge System Certification. Recently, OnePlus also unveiled its OnePlus 10R, and one of its editions comes with the same 150W fast charging. 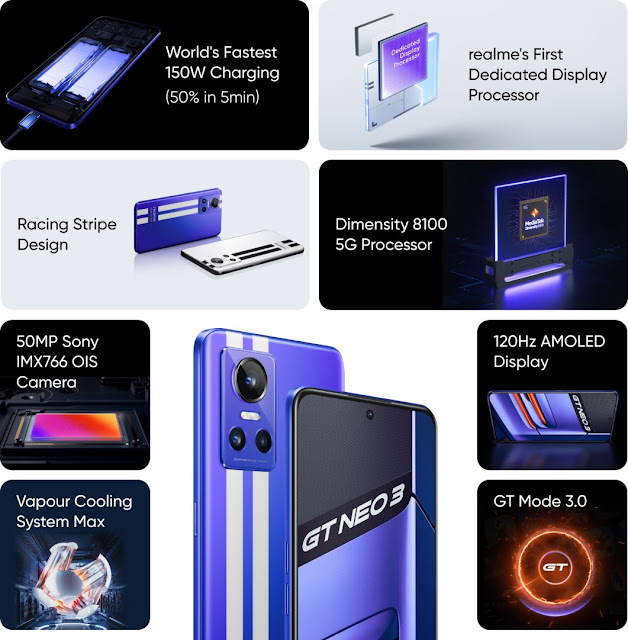 The Realme GT Neo 3 is powered by the MediaTek Dimensity 8100 SoC paired with up to 12GB of LPDDR5 RAM. The phone also comes with 128GB or 256GB of UFS 3.1 storage. To further improve gaming performance, the phone has a second custom chip dedicated to improving frame rates in games and an advanced cooling system. 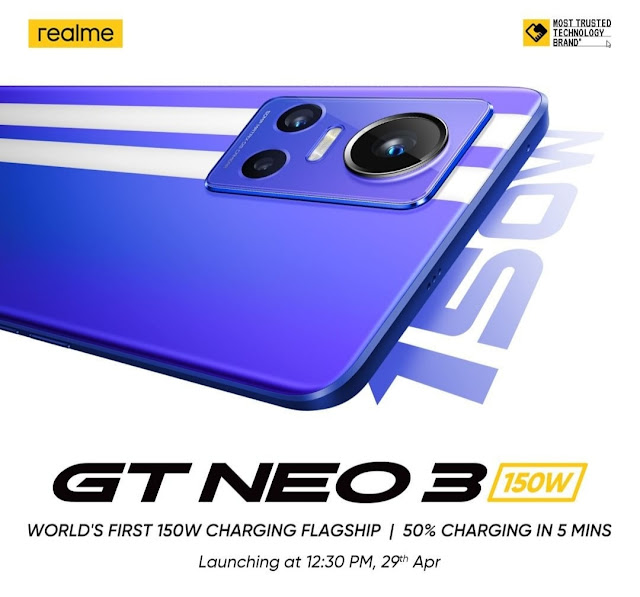 On the back, the Realme GT Neo 3 camera module houses a 50MP Sony IMX766 main camera sensor. The main camera comes with support for optical image stabilisation (OIS). There is an 8MP ultrawide camera and a 2MP macro camera. It has a hole-punch cutout at the top centre for the 32MP front camera.

The #realmeGTNEO3 comes in three classic, vintage colours to transport you to the world of racing:
👉Nitro Blue
👉Sprint White
👉Asphalt Black#NEOSpeedAwakens

Our 150W UltraDart Charge went through multiple safety tests and benchmarking. It is now TUV Rheinland certified as well. You can chuck all your worries, and fuel up the #realmeGTNEO3 with amazing speed and safety.#NEOSpeedAwakens pic.twitter.com/rZz8lcLZtr